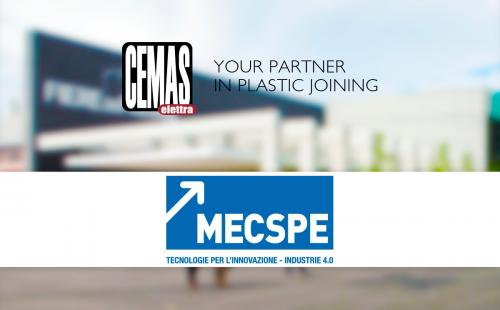 After 17 editions, today MECSPE is considered one of the most important events dedicated to innovations for the manufacturing industry. The 2017 edition numbers have consolidated the growth trend that has characterized the event for several years: 45,817 visitors, 105,000 square meters of exhibition space, 2,051 companies present, 10 "Piazze dell'eccellenza", 58 " Unità dimostrative e isole di lavorazione", 7 production districts, 11 thematic halls, 75 training sessions organized by companies, universities and associations and 9 guest delegations from some of the most interesting plastic markets (Brazil, France, USA, Poland, Russia, Czech Republic, Turkey, Tunisia and Spain).

Due to the importance of the exhibition, in its booth, CEMAS Elettra will show two of its most important welding technologies: simultaneous laser welding and InfraStake welding.

The CEMAS laser technology is the only one on the market equipped with a "single source" modular architecture that allows to "customize" each machine, equipping it with the exact number of laser sources needed for the welding of a specific project (on contrary, the other players on the market only sell packages of 5 or more sources). Working in this way, CEMAS guarantees the best quality-price ratio, in order to allow customers to purchase only the components they really need.

In the booth, in particular, CEMAS will exhibit the MF120 bench laser machine (which can be equipped with up to 12 laser sources).

InfraStake is a revolutionary "steel" technology that can be considered the evolution of ultrasonic welding technology and hot staking. Its functioning is simple but extremely efficient:

using specially designed bosses (which act as references) two components are posed one on the other. Once in the right position, the InfraStake modules heat the bosses with infrared light until they are melted. At this point, an unheated punch, driven by a low-force pneumatic cylinder, presses the boss creating the joint.

Although this technology (conceived, patented and developed by the North American company Extol Inc.) has been on the market for over 10 years, it will be exhibited for the first time in an Italian fair at MECSPE 2018. Since November 2017, CEMAS is the only authorized distributor for the European and South American markets.

During MECSPE exhibition, CEMAS will also take part in "Digital Factory: the Italian way for Industry 4.0", a project that is part of "Digital Factory beyond automation ©" (South entrance, Pad 4), an initiative to show the decisive role of the 4.0 technologies in the various applications sectors and contexts.

Specifically, a CEMAS MF240 laser machine, interfaced with other machinery, will be part of a production line that will produce (in real time) gadgets that will be distributed to visitors during the fair days.

As always, our team will be at your complete disposition to discuss, share and evaluate your projects.